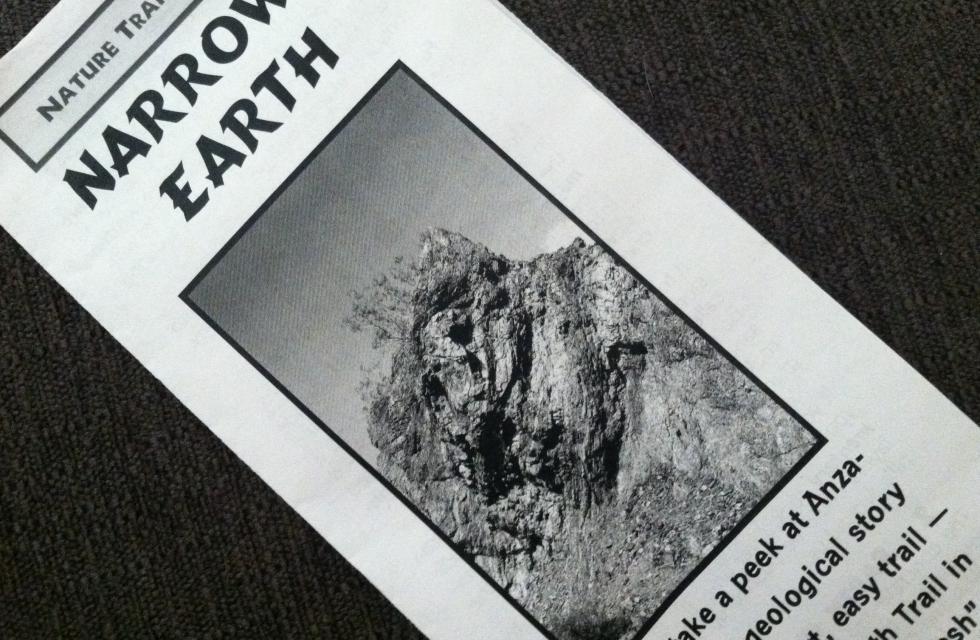 Welcome to the Narrow’s Earth Trail
Faulting, flooding, gravity and wind are sculpting the earth.  The story is written in the rocks.  It’s a story that’s been written over millions of years and is still being written today.  We humans are visitors during only a brief span of time.

Follow the numbered posts for a trip into the exciting and moving world of geology.

1. Ancient granite
More than 100 million years ago, this rock in front of you began to form deep inside the earth it was hot liquid rock, called magma.  Thrusting into the earth’s crust, it slowly cooled underground and hardened into igneous rock.  Because it cooled slowly, it crystalized into a variety of minerals, giving it a speckled appearance.

It took millions of years of weather and erosion to expose this type of igneous rock called granite that’s so noticeable in Anza-Borrego Desert State Park©.  Long ago, the sand you’re standing on was part of the rocky hillside around you.  From magma to granite to sand to…what’s next?

If you could stay for a few thousand years, you might see it form into layered, or sedimentary, rock.  Over time, the sedimentary layers could be pushed up to create new hills around us.

2. Earth on the move
The concrete and boulder wall in front of you was build by the road crews back in the 1930’s.  the crews named this area “Powder Dump Wash”.  It was part of a storage house where they kept explosives.  If you look upslope from it, you’ll see where two different types of land meet.  The distinct line where the two rock types come together is called a contact zone.

This contact zone shows us that there is a fault line here.  Notice how the rock edges are worn along the contact zone from the force of constant movement?  Imagine the tremendous power that slams these giant walls of bedrock together during an earthquake.

Speaking of constant movement, have you felt the earth move?  Dozens of tiny quakes shake this area daily.

3. Hard rock, Soft rock
Look up to your right at the small caves and holes in the sedimentary rock.  When this rock was formed, it had pockets of softer material here and there.  Over time, rain and wind removed the softer rock, leaving the tiny caves.

Most of the slopes of the Vallecito Mountains above you consist of granitic rock pushed up fairly recently from inside the earth.  Because you’re in an area fractured by earthquake faults, you’ll see older sedimentary rock right next to granitic rock.  Watch for examples of this and more ‘holey rocks’ along the trail.

4. Faults everywhere
Do you see the crack in the rock wall in front of you?  You probably already recognize it as a fault.  The rounded edges of the contact zone and the different kinds of rock material on each side give it away.

Here in Anza-Borrego there are thousands of small faults like this one.  You’re also surrounded by many large and active faults that we share with folks all over the southwest.

Northeast of us is the San Jacinto Fault Zone.  Towards the west-southwest is the Elsinore Fault Zone.  Both of these major fault zones are associated with the San Andreas Fault, the largest and one of the most active in California.

Geologists studying the San Andreas Fault have discovered identical rock material on each side of the fault, 400 miles apart.  The Pacific Plate continues to move north, carrying local rock with it as it travels.  If you sit on a costal rock in Monterey, you’re likely sitting on a rock that was once here at Anza-Borrego.

By the way, faults are the main reason Anza-Borrego has its wonderful palm oases.  The fault line creates a crack in the earth that allows water to seep up.  In this region there are hot springs and cold springs.

5. Salt and Pepper
Along the trail you may have seen darker colored rocks.  These darker rocks were formed over thousands of years when this area was covered by an ocean.

These sedimentary deposits have been moved aside by the harder granitic rock that’s pushing up through it.  It’s called tonolite and is a mixture of feldspar, the “salt” in the granite, and mica, the “pepper.”

6. Time warp
Does this rock look different?  You’ve just gone back in time.  Some of the oldest rock in Anza-Borrego Desert State Park stands in front of you.

This rock was created when forces compressed and warped mud and sand layers.  It’s a good example of metamorphic rock, that is, rock that’s been changed by pressure, heat or chemical action.

When this rock was at the bottom of the sea, about 450 million years ago, this cliff was located sough of what we now call Guaymas, Mexico.

On the left side of this formation, notice how the layers of sedimentary rock are turned vertical by nature’s forces.

Behind you is a dark streak in the hillside just like the one you’re facing.  Water, racing down the mountain, cu a wash right through the middle of this formation.

7.  Water works
Look back up into Powder Dump Wash to see the rugged slopes of the mountain.  Summer thunderstorms drop heavy rain that carries enormous loads of sand and gravel down.  This sloping land in front of the mountain is called an alluvial fan.

This alluvial fan leads into San Felipe Wash, which, during torrential summer storms, carries water all the way to the Salton Sea 25 miles away.

As you prepare to leave powder Dump Wash, notice the white streaks of quartz on the walls of the Narrows.  The next wash to the east is Quartz Vein Wash, named after the beautiful streaking in the dark walls.

Our lifetimes are but a blink in the eye of geologic time.  Faulting, flooding, gravity and wind continue to sculpt the earth.

Here, the story is written in the rocks.  Where you live, the evidence may be less visible.  But wherever you are on Earth, you’re surrounded by the active processes of geology.

We hope you’ll look for the stories written on the land as you travel through the rest of the park and back home again.